Theo Jansen’s wind powered strandbeests, bridging art and engineering, wind and transportation, might be a rich collection of ideas for students to explore.

It seems I’ll be working with a small group of eighth graders on a STEM club project.  This term the project will have only five sessions, so I’ve been casting about for something interesting yet simple enough to fit into the time available for its completion. (Sort of inverse Parkinson’s Law!)

I bought two strandbeest kits. Since I couldn’t allow for shipping time and had Amazon Prime anyway, I settled for cheap knockoffs.  Assembling one took me about 2.5 hours. It’s tabletop size, only about 8 inches long.

It’s mildly interesting to just assemble the kit and blow on its windmill to make it creep across the table. It’s even challenging to parse its rich visual complexity to see how do all those moving parts work.  But really, where’s the science, technology, engineering or math in just that?

There are two directions a team could go deeper with this.

One path would explore Theo Jansen’s work and then its relation to wind power and renewable energy. 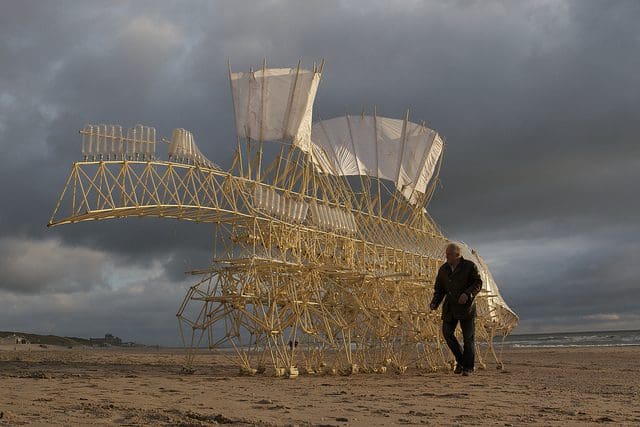 Jansen did a TED talk, and many others.  Besides videos of beast-on-the-beach, some show nitty-gritties like his PVC pipe joinery. (I wouldn’t dwell on the performance art stuff about how the beasts are a new life form that reproduce themselves using us as their vehicle.)

There is some interesting mechanical engineering  with Jansen’s linkage: as each “foot” takes its step it traces out a loop with an almost straight-line bottom. Where is our little toy wobbly or unstable?  Do Jansen’s big creatures have the same problems?

There’s even computation, about how he did genetic algorithm simulations to determine the relative lengths of the links. There are linkage simulators on the web.  What would happen if some links are longer, or shorter?

What about wind power?  How much power can wind deliver? Find the formula for how much electrical power a turbine can deliver, for a given size and wind speed.  How many (milli?)watts does our little windmill deliver — you can measure its size, but what MPH can you blow? How would the efficiency look if we had a battery-operated electrical motor instead?  Why do contemporary wind turbines have long, skinny blades instead of classical wide windmill blades?

How about wind for transportation? Does anybody here go sailing? Why don’t we have land sailing? Why do cars and trucks have wheels instead of legs and feet? A strandbeest goes sideways when its windmill faces the wind.  How could it go a different direction? Could it walk directly into the wind? Should California, or Denmark, or Chile, have wind-electric hybrid cars?

STEM and robots are not synonymous, but the connection can be fun and rewarding.

You can’t really tell from the little pic, but the windmill drives a two-stage gear train.   Imagine motor(s) turning things instead of the windmill.

For the  remote control, well, we will have just finished up a model airplane program, with transmitters and servo receivers and such.

Remotely starting and stopping is a start, but to steer something you need to make it turn.  Could join the two kits together into separately steerable sides.  Actually, the baby strandbeest is assembled in two halves, and someone shows a way to separate them for independent control.

There are yet again two options here.

Turns out the gears in the model kit are compatible with some robot kit geartrain leftovers salvaged last year. Also I have some beefier servos that (I am told) can be configured for continuous rotation, yet the speed is still controlled by an ordinary RC receiver.  Figure out how to mechanically attach whichever motor to the strandbeest frame so the gears mesh so it can safely deliver its torque.  Figure out how to get the servo horn to turn a gear in the gear train.  Actually, the servo has its own geartrain, and turns slower than the windmill does: figure out which gear to drive.  Are little custom connectors or adapters necessary? Can the 3-D printer help, and how do we design the parts?  Which RC channels, on which transmitter levers, steer the thing?

Remember the cartoon characters who try to speed up their little sailboat by huffing and puffing and blowing on the sail?  Suppose the strandbeest carried an airplane propeller to blow a breeze on its windmill?  Steering control would need two windmills, two propellers, two transmitter throttles, two operators learning how to coordinate and cooperate to get that beastie through the obstacle course.  Maybe the propellers want to be at the outside ends blowing toward each other.  If the strandbeests are facing opposite ways, does that mean one needs to go “backwards”?  Can its windmill simply be mounted on its opposite end, or does the twist in the blades need to be reversed somehow?  What if the propellers can’t be controlled to blow gently enough?

Well, these are just thoughts and ideas, untested against the real world of real students.  I hope I can follow up some day with actual results.